For years, the world of shaving was dominated by big names like Gillette and Schick. While Gillette provided an excellent shave, the men paid an obscene amount of money for replacement blades.

But in recent years, there have been several new entrants to the market. One of the most popular entrants is Harry’s because their products are well made and reasonably priced.

Recently, I had the opportunity to review Harry’s razor blades.

Will these razors stand up to the competition? If you’re looking for a one-of-a-kind razor and affordable replacement blades, this Harry’s razor review is for you. 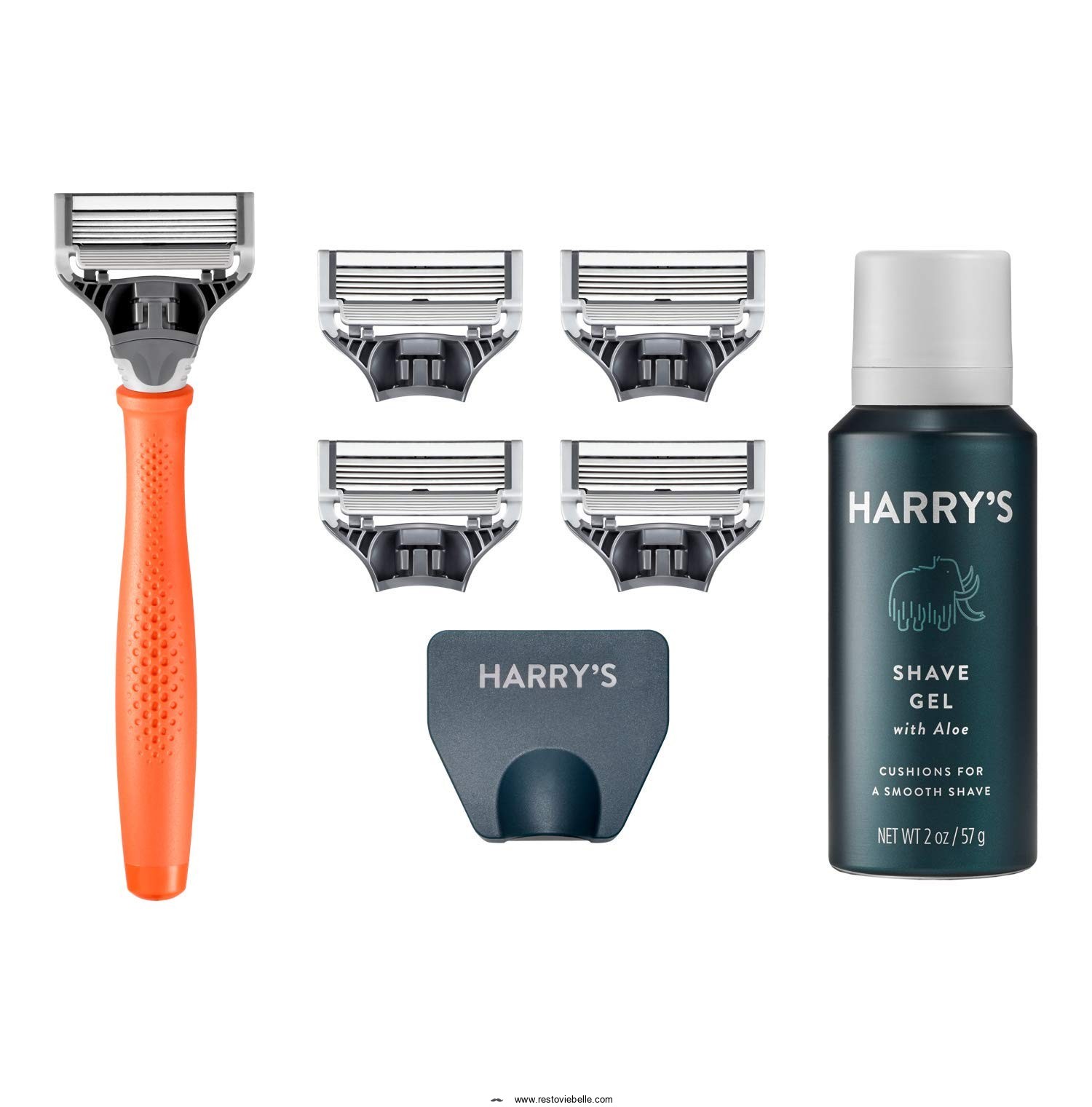 4.5 out of 5
Harry's Razors for Men - Men's Razor Set with 5 Razor Blade Refills, Travel Blade
The razor itself is pretty basic, but that’s why we like it. However, you can probably compare it to a premium Gillette Fusion cartridge razor.

The rubberized grip makes it easy to hold and comes with a precision trimmer to shape your sideburns.

Generally, you can finish shaving in a minute with this razor. There are no problems or nicks, thanks to the shaving gel.

The shaving experience is pretty straightforward, but I was amazed at how amazing the razor felt. You may have known that this practical and stylish razor was only $ 5, an incredible price compared to the $ 20 + spent on replacement Gilette handles and blades.

The shaving gel is well made with natural ingredients like aloe vera and cucumber. We liked it better than the shaving foams we’ve tried. The lubrication was smooth, and the razor glided over the skin quite quickly. We also recommend trying their aftershave balm, which is far superior to most other shaving products. 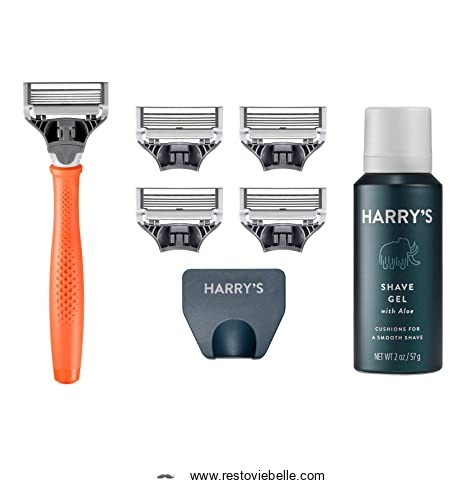 We bought our Harry’s razor on Amazon. The kit includes the razor handle and four cartridges, the cartridge cap, and Harry’s shaving gel.

Everything comes in a fancy box, unlike some razors we’ve bought and tried before. If you were to collect this as a gift, it would make a good impression.

When it comes to style, we’ve yet to find a razor to match Harry’s razor. Looking squarely at the 1960s era “Mad Men,” its uniquely designed handle and head opts for simplicity and elegance compared to the more complex razors and handles you’ll find at other companies.

If you want something that looks great next to your sink or hanging in the shower, look no further. 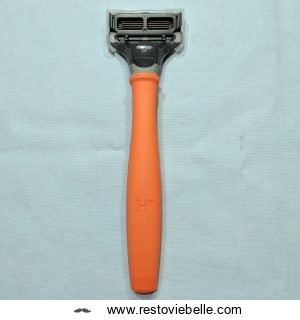 I like the design of the handle. While some may consider it simple, I would consider it minimalist. I’ve had enough chrome razor handles in many fluorescent colors; This is a nice change of pace.

The entire handle is made of rubber; this makes for an excellent grip when shaving. 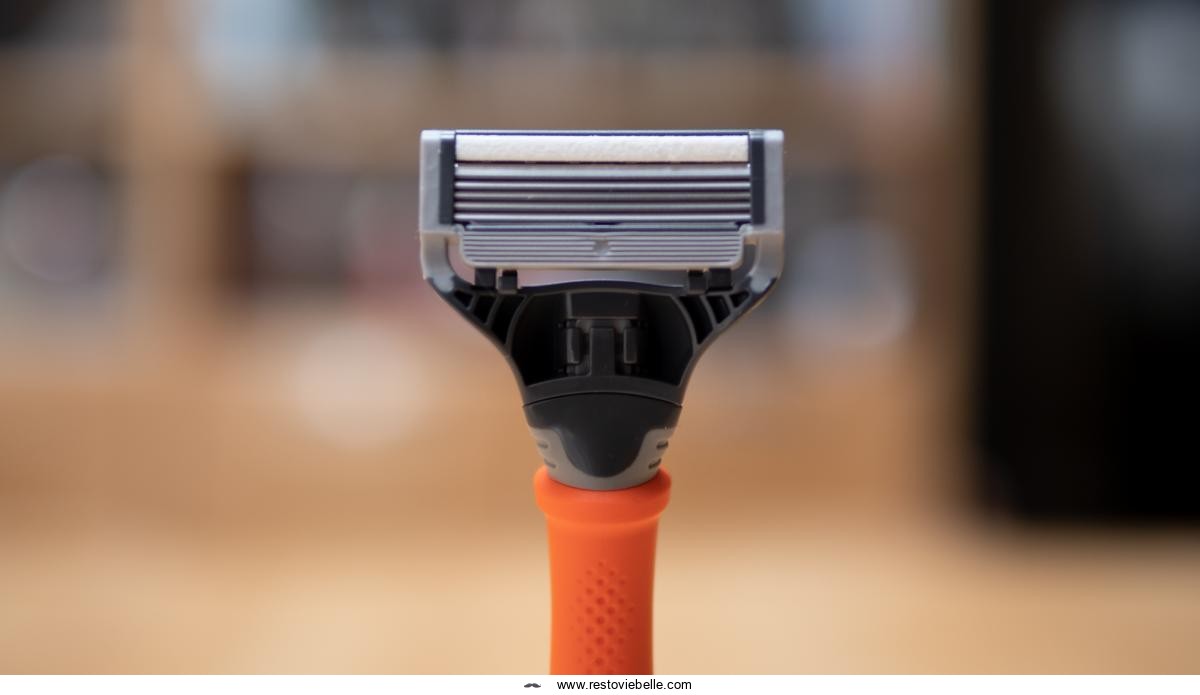 The cartridges themselves are also of good quality and have improved even more since a 2020 update to the manufacturing process.

The overall design remains the same as ever – each cartridge is mounted with five thin stainless steel blades, with a lube strip on top and a finned rubber area underneath to pull hair from the face into the central position for the cut.

A rubberized hinge between the handle and the blades flexes to keep the razor in close contact with the skin without applying too much pressure. In contrast, a handy single-cutting blade sits on the reverse of the cartridge on top, which helps maintain sideburns and beard—ordered borders.

The cartridge head pivot is done with rubber connectors on each side and plastic pieces to keep it from going too far back or too far forward. The pivot is estimated at 60 degrees. There is some resistance at the pivot. It’s a little stiff to push back, but it recovers well.

Having grown a four-day beard, my face was the perfect testing ground for shaving cream and a new five-blade razor with Swedish steel and German craftsmanship. Harry’s shaving cream formed a nice lather and had a faint mint scent. Unlike many men’s shaving creams, I didn’t notice any burning or tingling – sensations that I don’t mind, frankly, but you could.

Once I started shaving, I realized that the razor was perfect.

Usually, my cheeks take at least two strokes after four days of not shaving, but this thing did a clean sweep on the first stroke. Just my chin, shaggy ground zero on my face, required several strokes for full waxing, but overall I was impressed with the performance of my new Harry razor. Getting all the hair out of the blade took a while, but that’s partly my fault for letting my beard grow out.

Smooth surfaces are always easier to clean. With a soft handle, most of the razor is pretty easy to wash, without much dirt remaining after shaving.

The razor head was also easy to clean, as a simple rinse would remove cut hair. However, the cartridge has several open spots under the blades that catch hair and soap while shaving. Even after rinsing for a few seconds, the stains would still retain debris. Just making sure to concentrate the water directly on them would they come out clean.

If you shave in a sink, this would not be a problem, as you have a large stream of tap water. We had to direct a small jet to the right place to clean the cartridge in the shower. It wasn’t a significant problem, but it took a few more seconds.

Even so, the shaver is clean. Even its most minor parts, like the rubber fins at the base of the razor, are large enough that hair can be rinsed out rather than caught and held.

If you’re someone who likes everything to be neat, then too, the lubrication strip on top of the razor didn’t degrade quickly.

No issue with the subscription product you go with through Harry’s, the expense for every blade remains the same at $2 bucks per blade – which tends to make it comparatively affordable…

…but how does that stack up to rivals?

Likely not as significantly in savings as you could initially think…

To put this in comparison, when purchasing a 12 pack of blades from Gillette (sure, it’s a more significant investment decision cost), you would have to pay around $2.37 an edge (or $28.50 for the 12 pack).

When you evaluate Harry’s to others in the market, while it may seem low-cost from the onset, if you can manage the more essential deals, it’s not a considerable expense saving as one may believe.

Ah, this is the large query in harry’s razors review. While Harry’s doesn’t feature client comments on its website, they have been reviewed by numerous other sources. Regrettably, not all of the studies have been optimistic.

Numerous clients who have submitted Harry’s razors assessment have especially said that they favor Gillette above Harry’s, stating that Harry’s razors are truly fairly rough and are hurting their face.

Other individuals have mentioned that Harry’s razors are traveling out of their palms when they try to use them. This is regardless of Harry’s claim that their razors have been optimally created to attain the opposite.

In my opinion, Dollar Shave Club is better on cost and ease of service. DSC has slightly better quality at a much lower price. Also, if you want better blades but at a higher price, choose Gillette.

I loved Harry’s razors, everything about them. I beloved their look, their high shave quality, their shave ease and comfort, their shave time, and their costs.

For me, Harry’s provides the ideal combination of quality, price, and efficiency. Any person who is required to shave on a regular foundation ought to at the very least try Harry’s trial established. 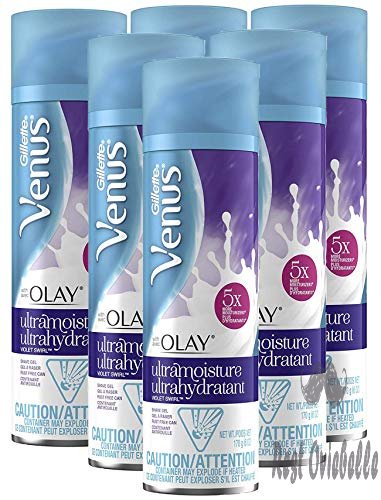